Natalie MacLean stands accused of appropriating wine reviews from other writers, reproducing excerpts without permission or acknowledgement. The details can be found on this article from Palate Press. Interestingly, another set of allegations emerges in the comments, but that’s for others to pursue.

Ms. MacLean has posted a variety of rebuttals, both in the comments on the Palate Press article, most recently on her own site. Charitably, the tone of her remarks prior to this latest article seem to be characterized by an attitude that amounts to “oh tee-hee silly me! I’ll fix that!” This must have eventually appeared as disingenuous as it is to her, for the latest explanation contains this gem:

I believed then (and still do) that another criticism or evaluation of the wine provided a helpful comparison for my readers, especially since I thought that the manner in which I was attributing the reviews was appropriate, given that I assumed they were already in the public domain on other wine review sites and liquor store sites. [boldface mine]

So If I read this right, a professional writer — no, no, The World’s Greatest Wine Writer* — assumed… assumed that work published on other wine review and liquor store sites was in the public domain?? You must be kidding me. If true, then she has an incredibly naive understanding of copyright laws and publication permissions. She is basically asserting that the so-called World’s Greatest Wine Writer is missing a grasp of the fundamental principles that allow her to earn a living. I find that hard to fathom. To me, it seems she’s just concocting a series of semi-plausible stories that will appeal to her existing fans, hoping to weather the storm and get back to making money.

But all of this isn’t what gets me. I’ll let my capable friends fight for their own rights. What bothers me most is the persistent remarks I’m seeing on Twitter about spam. I’ve never had the misfortune of getting on one of her mailing lists, so what I see is second-hand at best, but it’s disturbing. I would suggest that Ms. MacLean review the latest legislation on unsolicited mail in Canada, because if these allegations are true the resulting fines will have her destitute in no time.

The spam isn’t restricted to mail either. The Twitter account @NatDecantsFans, which claims both to be run by “Pat Simpson” and by “a group of wine lovers” seems to be nothing more than a keyword driven spambot. Several times a day, at regular intervals, this account will send the same tweet to many users. The tweets contain links to MacLean’s website and her mobile app. The only thing that the recipients have in common is that they used the same keywords recently. I checked several accounts and none of them appeared to be following @NatDecantsFans. So I verified my theory on several accounts I manage, sending out a tweet that contained the words “wine” and “cheese”. Sure enough, most of those accounts received a personalized message: “[name], you’ll find 219 cheeses paired w/ wine in this web Matcher [link redacted] & mobile app [link redacted]”. 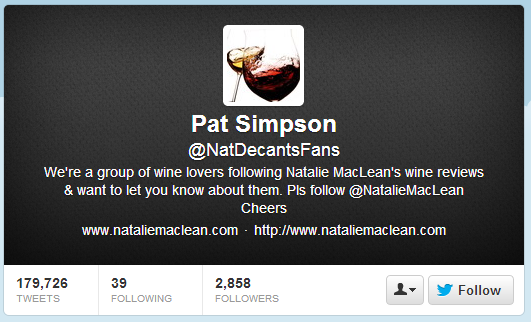 Theft of content understandably gets most writers pretty riled up. From what I’ve seen of the wine writing profession, it’s a hard road. Most of the people I know couldn’t earn a living if all they did was write about wine, and every bit of revenue, of acknowledgement, makes a difference to their viability and their ability to continue doing something they love. if I were in their shoes I’d be pretty upset too.

But what irks me is spam. It’s one thing to get spam from an outright fraudster aiming to steal my money or identity. I mean they’re criminals, we don’t hold them to a very high ethical standard. But when someone purporting to operate a legitimate business wilfully ignores small things like attribution, marketing permissions, and Twitter’s Terms of Service agreements. That gets me angry.

I’m really looking forward to hearing from “Pat Simpson”, especially “her” explanation how she can generate 20 or more tweets in the span of a few seconds. Not to mention her uncanny ability to find people talking about the subjects that interest her so. Failing that, I’m looking forward to a another creative explanation spun for fan consumption. I’ll also be pursuing an account review from Twitter.

To follow the story on Twitter, try searching the hash tag #NatNabbed. This is going to turn out to be a classic PR battle, deny deny vs. an increasing number of revelations. It’s kind of like Canada’s miniature version of Lance Armstrong. I wonder if someone in Vegas will set betting odds on this one.