My interest in sculpture is the fusion of a diversity of influences.

During my university days, I had the tremendous opportunity to learn a few things about glassblowing, with a twist: this was laboratory glassware, not art glass. There was no a formal course. Our chemistry labs had a rare gem, a master who was willing to teach. All that was required was to put your name on his chalkboard in an available slot, and then show up on time. Every time I watched him work, I was struck with his knowledge, his skill, and how he made true works of art that few would ever appreciate; in fact most of his work would wind up in the trash once the research was done! The sliver of his knowledge that I learned was tremendous, exciting, and frustrating all at once.

I never made the transition to glassblowing as art, but this is the origin of my love and appreciation of all things glass.

Stained glass is a lot more accessible than glassblowing. It’s easier to handle a soldering iron in an apartment that an oxyacetylene torch. There are some amazing works of art in stained glass. Once, while touring an exhibit in Montreal, I was struck by a work that broke out of the constraints of the traditional plane. Since then, I have thought of stained glass as a sculptural medium.

The problem has been that realizing the ideas I have for stained glass has proved to be difficult to impossible. This has reflected both the complexity of the designs, limited manual skills, and a general lack of patience. 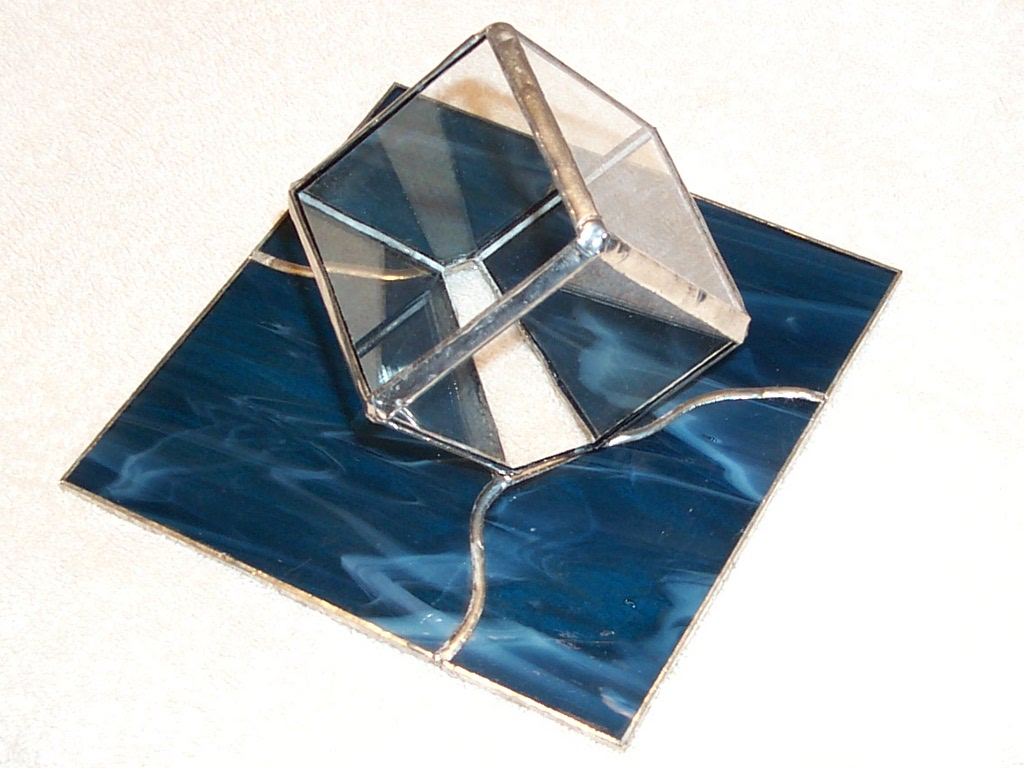 Although I tend to think in very precise terms, this precision has never translated to manual skill. My ability to translate ideas into actual works has always been limited.

Many years ago I found an open source rendering package called Pov-Ray. Pov-Ray  was unique at the time, because it doesn’t incorporate a modelling program. A “scene” is described in a text file, using a scene description language. While this is a barrier to most, it was perfect for me. I struggled with the modelling tools of the day to get things just right, but with Pov-Ray, I could place something to five decimal places. Now at last I could visualize my ideas!

A lot of the work that resulted can be found in my images area.

Also while in university I scored one of my obligatory arts credits by working on a project to parse the constructed human language Loglan. While the project wasn’t successful from a technical viewpoint, two good things came out of it: a high mark, and a decent understanding of various approaches to “Artificial Intelligence”.

I have subsequently found many places where I have been able to apply various AI techniques in my work as a software developer, and I am particularly fond of genetic search algorithms.

At some point I started sketching convoluted, primitive geometric forms by hand. The original intent was probably to develop more skill at freehand drawing, or at least to do something interesting within the range of my skills. These forms quickly became sufficiently complex that they became quite difficult and time consuming to draw. One significant mistake and the drawing was ruined. At this point I turned to Pov-Ray to visualize the designs.

This was quite successful, but now that I could see the works in a 3D visualization, I became dissatisfied with what I considered to be flaws in the design. Making changes to the design to achieve the visual effect I wanted was also quite complex, since any single change affected other parts of the design.

I decided that what I should do is write an algorithm that would create a design based on the aesthetic criteria I decided were “good”. This seemed to be a perfect application for genetic search. As it turns out I needed to make significant adaptations to the usual algorithms in order to get useful results, but in the end I succeeded.

I first rendered the resulting design in glass, which I still think is the best medium for it. Unfortunately there are only a few people who have the skill and knowledge to produce a work like this, and not only am I not one of them, I’m nowhere near rich enough to commission the work.

Then I considered the possibility of creating the design in other media, including wood, plastic, and metal (cast and milled). Each presented seemingly insurmountable technical problems. Now technology has come to the rescue with three-dimensional printing.

Even though it may be somewhat analytic, I usually name my works based on the date that they were conceived or first created. It helps me keep track of them and the evolution in my thinking and approach. This design challenges that a bit because it has gone through a significant development over time. So I have been using “Infolds 1” to refer to the family of variations on this original path.

The first version of “Infolds 1” carries a date of 021027, or October 27th, 2002. The effort to see this design realized has been anything but intense, but  now (April, 2009) I have converted my design into a format suitable for 3D printing, and three plastic versions are available for purchase online. I’m eagerly waiting for mine to be delivered. Understatement.