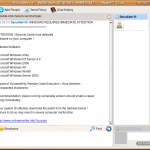 Ubuntu is an African Word…

…that means “Gentoo is too hard for me.”

This line came from a chat with another developer, and I had to write it down. It has a lot of truth to it, as I watch my system compile the latest point release of KDE, while telling me I need to compile a new kernel and rewrite my MBR with the latest version of grub. Sigh.

Maybe it’s not so much “too hard”, but just “too much trouble.” Don’t get me wrong, I love Gentoo. I’ve made my Gentoo box do some really neat things, and most of the time I know I have the latest and greatest installed and ready to go.

On the other hand, my Kubuntu laptop is a lot easier to maintain, even if it’s not right up there on the cutting edge. An Ubuntu maintenance update takes minutes; KDE will be compiled in 5 hours or so, and there will be manual steps to be done after that.

Then there’s the matter of “not by me” maintenance. If I put Gentoo into a production server, how long will it take me to train someone else to take care of it? What are the odds that they’ll fail? If they quit, how easy will it be to find a replacement? It used to be that I planned to build a stable binary build on a stand-alone machine, then use it to send binary packages to production servers, but even that still needs someone willing to deal with Gentoo’s quirks and complexities on the back end.

Tossing Gentoo and moving to Ubuntu may be copping out, but it’s a lot simpler. It’s not the “best” solution from a bit-head’s point of view, but from the management side, it’s “Keep It simple, Stupid” in action.

The biggest problem will be moving all the development tools and demos across. Switching distributions isn’t something to be taken lightly. It’s a job for when I have a few days to play… like that’s about to happen.

The decision to drop PHP4 support in the next version of Joomla was made yesterday.

There’s going to be some controversy over this one, but in my opinion, it’s the right move. It’s actually something I’ve been (gently, I hope) lobbying for for months.

Top reasons to move to PHP5: